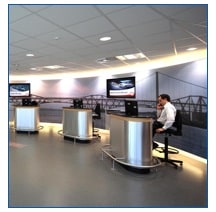 Over the next 10 years, BAA Scotland have a £500million capital investment plan rolling out across their three Scottish airports, £300million of which will be spent at Edinburgh.

Part of the investment of this substantial sum includes the formation of a Consolidated Car Rental Centre (CCRC), the first of its kind in the UK. The CCRC will provide an external car hire facility housing all Rental Partners while releasing significant space within the main terminal building, through which up to nine million passengers pass each year.

Pacific Building were delighted to be given the task of installing the joinery and ceiling, to a value of around £120,000.

Although the facility is situated close to the terminal, the building itself is substantial, and its complex shape presented various challenges for the team.

With experience of working in an airport environment, and confident in their forward planning and organisational abilities, Pacific Building are well used to facing challenges head-on.

Managing director Brian Gallacher said of the works: “Having recently completed works within Glasgow Airport, the CCRC project utilised our skills of working in both airside and landside environments. Our experience of working with increased security measures and around passenger traffic flows allowed us to ensure that minimal disruption was for both passengers and airport staff.”