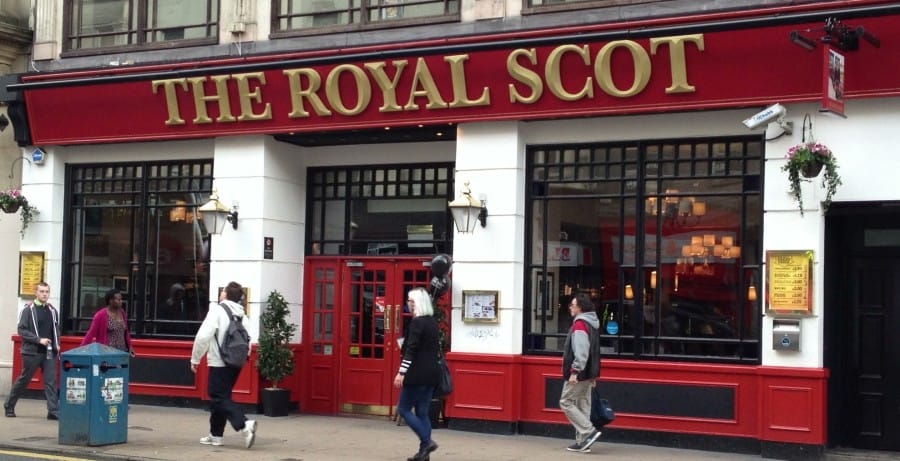 WHAT do you do if you own a hugely popular city centre bar and you need to refurbish it but don’t want to risk losing any trade?

In the case of The Royal Scot, on Glasgow’s busy Union Street, you entrust the project to fast fit-out experts Pacific Building.

Pub giants Mitchells & Butlers – the United Kingdom’s leading operators of managed licensed premises, with 1600 outlets in their stable – called on Pacific to carry out a significant makeover on The Royal Scot, formerly known as The Goose.

Pacific, who are the only only Scottish contractors retained by the Birmingham-based plc, were conscious of the fact that The Royal Scot had to strike the correct visual appeal, thus enhancing its reputation as a welcoming and popular watering hole across the road from Glasgow’s busy Central Station.

They drew on their vast experience of delivering to deadline and to budget, ensuring that the bar closed for just one week of the two-week duration of the work. Round-the-clock shift patterns were also deployed to ensure that disruption to trade was kept to a minimum and to facilitate the best possible result within the timeframe.

The Royal Scot – now renamed after the famous steam locomotive that used to be a familiar sight on the West Coast main line running from Central Station – is trading strongly and continuing to appeal to passing trade from commuters, the business community in the city centre and tourists.