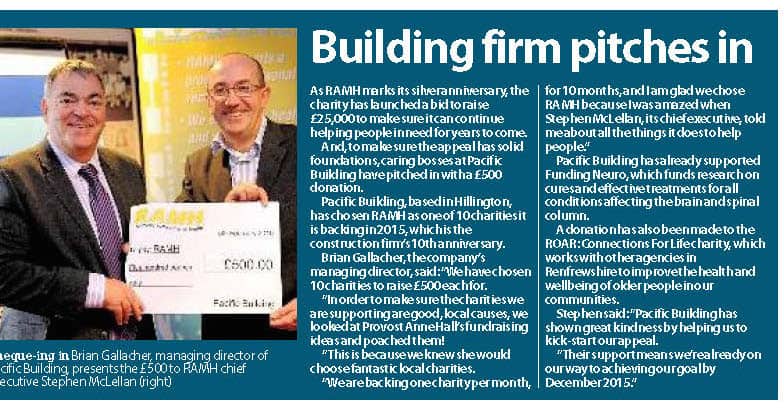 PACIFIC Building’s donation to mental health body RAMH was used to help launch a year-long fund-raising drive by the charity.

The generous gesture attracted extensive coverage in the Paisley Daily Express on Monday (16/2/15) and Tuesday.

We’re proud to support such a worthy local organisation and we were delighted to attend the group’s fundraising launch at St Mirren FC’s Love Street stadium, which was attended by many supporters and Renfrewshire Provost Anne Hall.

On October 29, 2014, RAMH (Reaching Across Mental Health) were the second of 10 worthy bodies to receive a donation from Pacific to mark the company’s anniversary year.

A cheque for £500 was handed over to Stephen McLellan, Chief Executive of RAMH, when he visited our office in Hillington. Pacific Managing Director Brian Gallacher was happy to repeat the exercise for the press cameras at St Mirren’s stadium, where RAMH launched a year-long appeal for £25,000.

RAMH, based in Paisley but active across much of West Central Scotland, is an independent voluntary sector organisation whose main aims are to enable people to recover from ill health and to promote wellbeing.