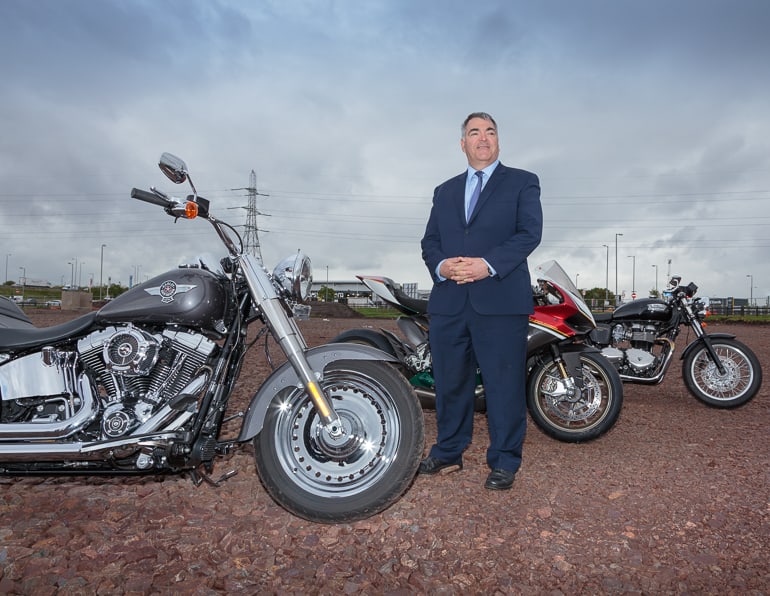 PACIFIC have secured a lucrative contract to deliver a new £10million motorcycle “village”.

They will fit out and construct the purpose-built showroom and service facilities for Ducati Glasgow, Triumph Glasgow and West Coast Harley-Davidson in Hillington Park, one of Scotland’s largest business estates.

Pacific, who are also based at Hillington, on the outskirts of Glasgow, will start work on the project at the start of June 2016, with completion set for early 2017.

It is expected that up to 50 new jobs will be created as a result of the new development. This figure is made up of additional retail and servicing staff joining existing staff and those involved in the construction stage.

About 100 skilled tradesmen will be employed for the duration of the construction process.

The two highly visible 18,000 sqft facilities will see Rogers, Rees & Robins Motor Group trading as Ducati Glasgow move from their current premises in the city’s Great Western Road and encompass the Triumph brand under one roof in one of the purpose-built, state-of-the-art facilities. West Coast Harley-Davidson will move from their site at Glasgow’s Charing Cross and occupy the other.

It is anticipated that 20,000 customers will visit the new motorcycle village in its first full year of operation.

Both dealerships have experienced significant growth over the last five years and have simultaneously found their city centre stores to now be restrictive to their growth plans.

The new dealerships will be built simultaneously in a prime position next to the M8 motorway and at the entrance to Hillington Park.

Brian Gallacher, Managing Director at Pacific Building, said: “This is a particularly satisfying project to have secured because it is an all-Hillington Park affair. It will be rewarding to see such a highly visible and sought-after piece of land alongside the M8 transformed into what will be one of the biggest motorbike multi-franchises in the UK.

“It is also great to be working with iconic brands such as Ducati, Triumph and Harley-Davidson, which adds to our already impressive portfolio of clients which includes McDonald’s, Glasgow International Airport, Tesco and Gleneagles Hotel, to name but a few. Our team are hugely experienced and highly motivated, and we can’t wait to put the Pacific mark on this flagship project.”

Martin Rees, Managing Director of Rogers, Rees & Robins, said: “We identified the need to move to bigger premises in 2012 and have been planning this incredibly exciting prospect since then. Hillington Park meets every requirement we had for the next growth phase of our business; a hugely visible, state-of-the-art facility housing two brands in plenty of space with a 50-space car park in one of the busiest shopping areas of Glasgow.

“We have the added advantage of positioning ourselves next to our colleagues at West Coast Harley-Davidson which will help us create a fantastic attraction for bikers and non-bikers alike.”

Don Rutherford, Managing Director of West Coast Harley-Davidson, said: “We’ve been looking to expand our operation for some time now so to tie in this exciting development alongside Ducati and Triumph is a fantastic opportunity that will provide Scotland with a real class-leading hub for bikers. Once complete, our building will be one of the largest Harley-Davidson dealerships in Europe.”

“It is also very pleasing to see that Pacific Building, a growing company based here at Hillington Park, has won the contract to build the new showrooms.”

Part of the funding of the development was provided to Rogers, Rees & Robins Motor Group and West Coast Harley Davidson by Clydesdale Bank in a deal facilitated by Deyrick Smith, Head of Commercial and Small Business for the West of Scotland.

The new dealerships will be not far from the Toby Carvery at Braehead, which was also constructed and fitted out by Pacific.