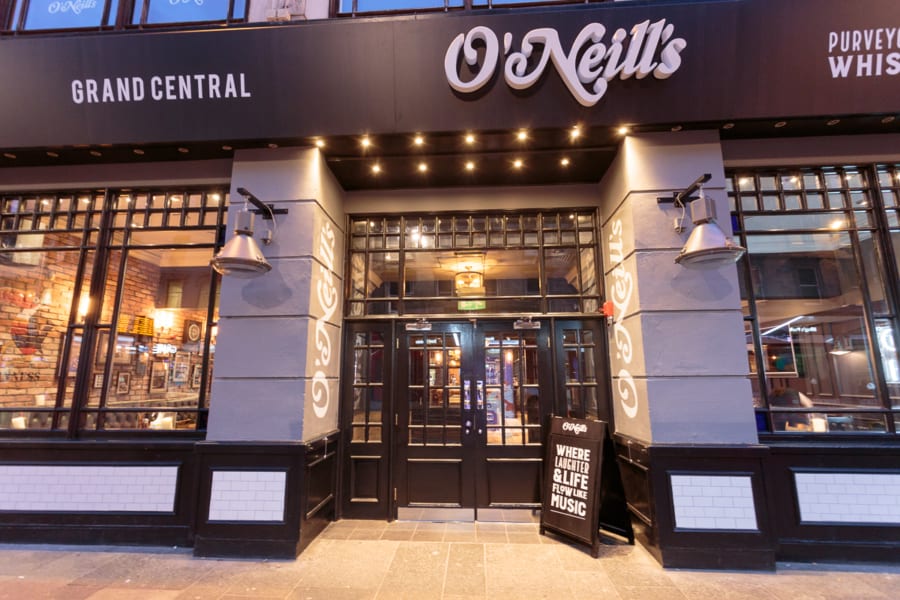 ONE of Scotland’s busiest city centre pubs has undergone a massive transformation – and it’s looking Grand!

Formerly known as The Goose and latterly the Royal Scot, the bar on Union Street in Glasgow has been rebranded as an O’Neill’s hostelry – to be precise, O’Neill’s Grand Central.

And the change couldn’t be greater – just about everything was replaced as part of the extensive makeover masterminded by Pacific Building.

In just three weeks, the pub was taken apart and put back together as an all-new O’Neill’s for client company Mitchells & Butlers, who are one of the biggest bar and restaurant operators in the United Kingdom.

The two-storey pub on Union Street – full name O’Neill’s Grand Central, in reference to its proximity to Central Station – is an Irish-themed bar that serves value-for-money meals and features televised live sports and music.

The transformation involved a complete strip-out of all fixtures and fittings from its previous incarnation.

Then Pacific got to work replacing:

The end result is an eye-catching addition to the socialising scene on one of Glasgow’s busiest streets.

It is also a sister bar to O’Neill’s in the Merchant City, which was also fitted out by Pacific.

It has been given a noticeable “step-up” in quality in keeping with its O’Neill’s identity, and it is on course to prove even more popular than it was in its previous lives.

The proprietors promise “sociable, down to earth eating and drinking that comes with great live music, big match sport, lively banter and a friendly smile” and loads of “craic”.

Let’s all raise a glass to that!