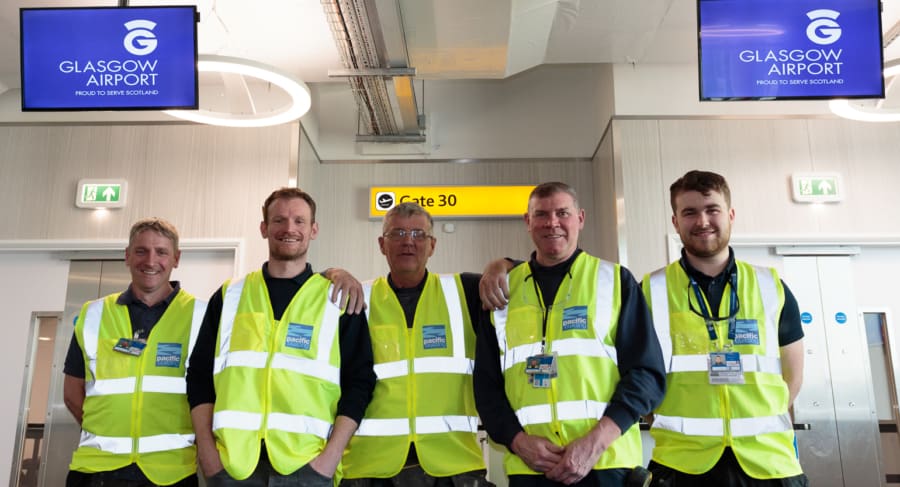 THIS is Pacific’s very own A-Team – that’s “A” for Airbus. They are the people who helped deliver the all-new pier and departure lounge for Emirates airlines’ Airbus A380 super-jumbo at Glasgow International Airport.

A huge welcoming party gathered for the historic occasion and no one was more proud of the moment than Pacific’s team of John Cummings, Joseph Brady, John McGuire, Robert Allan and Connor Skea.

Not in the photograph are site manager Martin Lamont, quantity surveyor Craig Taylor and contracts surveyor Martyn Duffy, who rounded off the Pacific contingent tasked with delivering the high-profile project.

The Airbus A380, which is the world’s largest passenger airliner capable of carrying up to an incredible 850 passengers, will fly daily between Glasgow and Dubai with a complement of about 580 travellers.

In recent years, Emirates have scheduled twice-a-day services by Boeing 777-300ER aircraft. But engineering works at the airline’s Dubai hub are closing one of its runways and reducing the number of possible aircraft movements.

So, for the time being, a single A380 flight will replace the two current Glasgow services.

When Dubai returns to full capacity, the double-decker A380 will be joined by a 777. It will mean a passenger capacity of three Boeings a day, shrunk into two aircraft movements.

The works to accommodate the plane and passengers at Gate 30 – which features Scotland’s only triple air bridge that permits a swift turnaround between arrival and departure – was complemented by external engineering works too.

These were overseen by main contractors Kier and included widening and strengthening taxiways, the relocation of traffic lights and other static objects and the installation of wing-protection measures (the Airbus’s wingspan is a mammoth 80 metres).

While the structural work fell to Kier, all other project components were the responsibility of Pacific, including the comprehensive fit-out of the passenger lounge that measures an impressive 850 square metres.

There was no room for manoeuvre on the 10-week timescale, with tickets for the first flight having already been sold, so even a short delay was not an option.

Pacific Managing Director Brian Gallacher said: “A huge pat on the back to all our guys – our very own A-Team – who pulled out the stops on one of our company’s most prestigious projects to date.

“The decision by Emirates to introduce the A380 is a huge milestone for Glasgow International Airport, 15 years after the airline’s inaugural flight to Scotland.

“We have forged a valuable relationship with the airport and this project represents a major vote of confidence in the city.

Emirates have carried more than 4.5 million passengers between Glasgow and Dubai since their first flight to Scotland in 2004.

Glasgow International Airport Managing Director Mark Johnston said: “We started planning for the A380 after its flying visit back in April 2014, so the introduction of a regular service – a first for Scotland – was literally years in the making.

“When building work commenced towards the end of last year and the date of the first flight was set, the hard work really ramped up.

“It is no understatement to say that hundreds of people from the Glasgow Airport team, our campus colleagues and suppliers worked incredibly hard and put in a colossal effort to meet the deadline.

“In my opinion, they displayed the very qualities that make Glasgow Airport the success it is. I want to say an A380-sized thank you to everyone involved.”