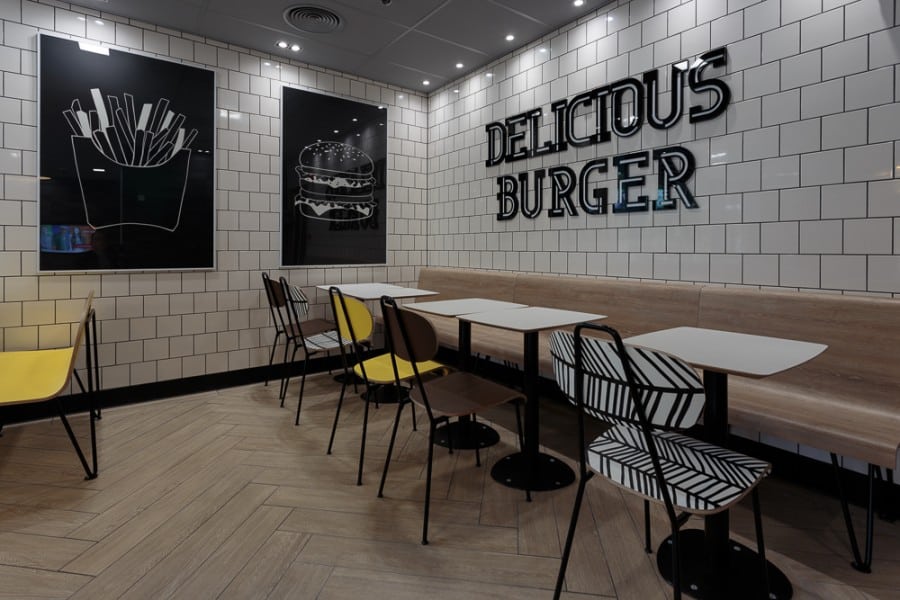 THIS is one of those landmark fast-food establishments – frequented by locals and visitors to the area and a must-visit if you are in the locality.

McDonald’s at Nerston in East Kilbride is situated on one of Scotland’s busiest road networks between Queensway and East Kilbride Expressway and, as a result, it has a reputation for being extremely popular.

It is noted for its breakfast custom and is well-known for being extremely busy at lunchtime, while not shirking its duties in the evening.

It is only the second restaurant in Scotland to feature the Alphabet theme – complete with butcher’s shop-style tiling, zebra-stripe chairs and dedicated colour scheme.

Pacific had completed the first incarnation of this restaurant a number of years before – we built it AND fitted it out – so we were the natural choice to give the restaurant a much-needed makeover.

The refurbishment, which sees it revamped to give it more of a welcoming café bistro feel, took just four weeks and was handed over to McDonald’s on May 11, 2017.

And crowds were lovin’ it as they queued up to order from the new computer kiosks, where the whole of the menu can be accessed with a swipe of the screen, with nutritional information also displayed.

Once customers have ordered, they can pay with card, and go to a designated area of the counter to pick up their food.

The kitchen has also been redesigned with all orders freshly prepared. Free-to-use tablets are also at some tables for customers to use.