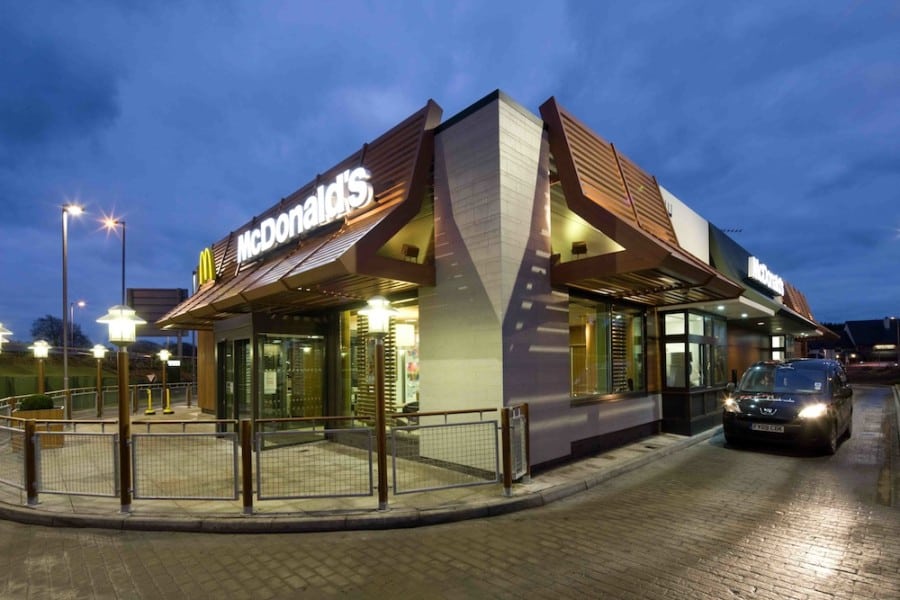 Pacific Building were tasked with the construction of a McDonald’s Drive Thru Outlet in Nerston, East Kilbride, one of the company’s first new-build restaurants in Scotland since 2003.

Due to the site’s low-lying location and its close proximity to a dual carriageway boundary, Pacific Building were presented with a number of challenges throughout the project, including flood potential and road subsidence.

Comprising  reclaimed land, the site included soft ground. Significant landscaping works were also required. In addition, the build coincided with an extended period of severe weather, during which heavy snow and frozen ground delayed progress of the works and threatened to significantly delay the original construction period of 12 weeks.

To reduce the risk of flooding, a sunken attenuation water system was installed, with sunken tanks providing drainage and slowing the flow of water to drains.

Due to the nature of reclaimed land, excessive piling and detailed foundations were required. A Geotextile membrane was installed to ensure that gas venting could be carried out, and 6 inch diameter pipes, 10-13 metres in length, were bored into the ground to ensure concrete slabs would sit securely on top.

As the works required digging into sloped land, in close proximity to a busy road, extra sheet piling was sunk 5-7 metres into the ground to provide a retaining wall and ensure that there would be no risk of the road subsiding.

Liquid DPM was used to speed up the concrete drying process and encapsulate the moisture in the slabs so that they were fully dried out before the floor tiling was laid.

While the main structure of the restaurant consists of a steel frame, clad with a composite panel, finished externally with a mix of trespa panels, timber and stone, the building is partially modular, with elements being manufactured off-site to not only improve quality but reduce the overall time spent on site.

Pacific Building also completed the internal fit-out of the restaurant, which is based on McDonald’s “Purely, Simple” interior design concep – a relaxed, “upmarket” atmosphere with sophisticated interior layout and decor, which Pacific Building have also rolled out across McDonald’s restaurants in the UK.

Pacific Building worked closely with landscape architects to assist with the creation of an attractive outdoor area, in keeping with the surrounding area and the high standards expected from McDonald’s restaurants.

Despite the disruption caused by the severe weather, Pacific Building were able to deliver the completed project with a minor delay of just one week. The client was delighted with the final results, and Pacific Building continue to have a close working relationship with McDonald’s.