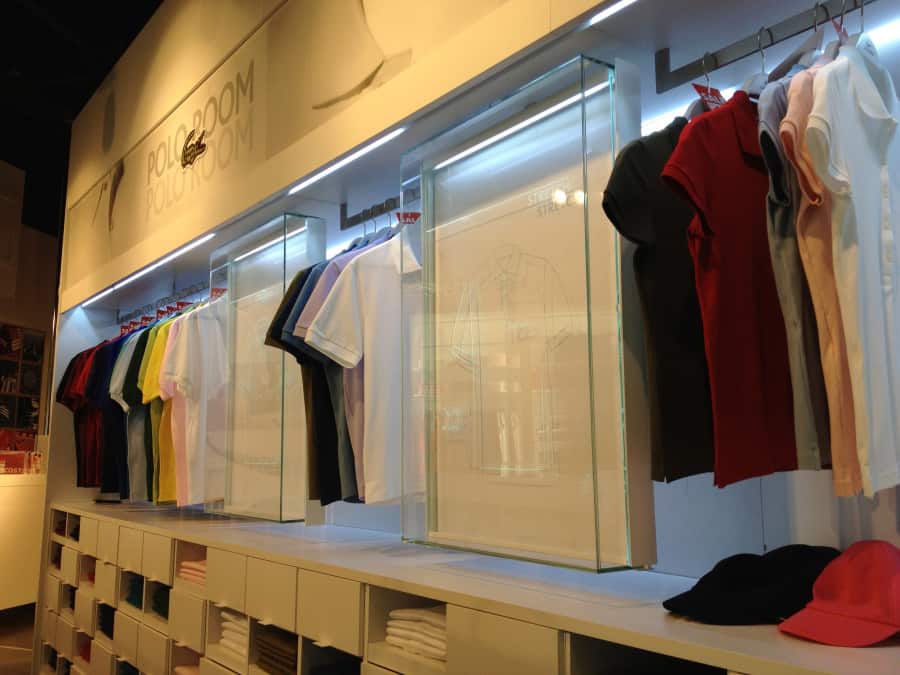 Pacific had to create, against an extremely tight deadline and in a “live” environment, two high-end retail outlets that would complement the profile and reputation of two of the biggest brands in world fashion.

Even though they are situated in the main concourse area of the airside space at Glasgow International, Pacific were able to complete the joint project with minimal disruption to neighbouring retailers and to some of the 3.3million departing passengers who pass through every year.

An additional pressure was the knowledge that, in the case of Lacoste – who occupy space in 120 airports worldwide – it was to be the first travel retail store in Europe to have the newly designed Polo Room, which consists of the Polo Wall and Polo Bar.

Strict scheduling, double-shifting and extra hours were all brought into play as Pacific drew on their vast experience to deliver yet another project at Glasgow, where their name is associated wiith numerous successful completions.

The short timescale saw Pacific take advantage of the close proximity of their ancillary office, on the perimter of the runway at Glasgow, so they could deliver materials and manpower efficiently and quickly. The end result came in on budget and on time.

High-end fittings and expensive mood lighting not normally associated with retail outlets were also an integral part of the specification adhered to by Pacific, who have a track record of operating to the highest standards at airports across the UK.

Lacoste and Hilfiger are able to offer a mix of men’s and women’s fashion and lifestyle accessories to the massive number of passengers transiting through Glasgow Airport, with Lacoste also offering a range of children’s clothing.

Customers benefit from the added advantage of tax-free pricing, saving them the equivalent of 20 per cent on domestic high street prices. Feedback from passengers has been extremely positive, many of whom are excited about having another two highly recognised international brands operating at the airport.

The stores, which cover 1100 sq ft, have added to Pacific’s enviable reputation as a company who are able to deliver complex refurbishments in “live” public areas such as airports, hotels, restaurants, pubs and offices – right across the UK – on time and within budget and with minimal disruption to neighbouring trade.
Both stores are managed by outlet pioneers McArthurGlen Luxury Retail, Europe’s leading developer, owner and manager of designer outlet villages.

Across the UK and Europe, there are numerous airport stores operated on behalf of Lacoste, whose brand ambassadors include American tennis star and grand slam winner Andy Roddick. Glasgow’s polo bar is the only one on the entire continent.

Pacific’s relationship with Glasgow Airport operators BAA is enhanced by the fact that many of their team hold “airside passes”, which means they have the experience and requisite clearance to work in airports – in airside, landside and aircraft manoeuvring areas.