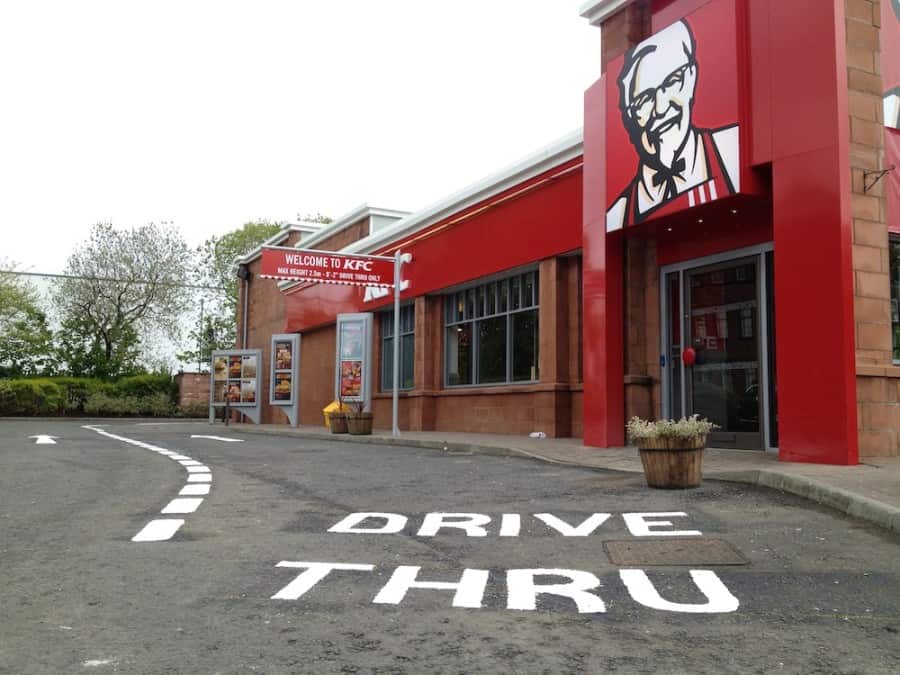 A landmark fast-food restaurant has reopened following an extensive and rapid £450,000 makeover, which required a 10-day shutdown of business.

The refurbishment of the KFC in Pollokshaws Road, Glasgow, which includes the introduction of a new designer look not normally associated with businesses of this type, was carried out and managed by Pacific Building Ltd.

The image enhancement is part of a programme being introduced at all KFC outlets across the UK, under which high-end fixtures, fittings and mood lighting are utilised in order to present a more upmarket image for diners.

KFC believe it allows them to compete better with the plethora of other food and drink retailers on the high street. The contract is the latest of five – with a total value of £900,000 – that KFC have entrusted to Pacific, who recently announced a 30 per cent increase in annual turnover to £9.7million, and who are well on their way to a fifth successive year of growth.

The other four restaurants that have been image-enhanced by Pacific are: South St Andrew Street, Edinburgh – which involved the total strip-out and conversion of a derelict former public house; and Athlone, Kilkenny and Cork, all in the Irish Republic.

The internal and external overhaul at the Pollokshaws drive-thru and restaurant – which is one of 10 KFCs in Glasgow – took just four weeks to finish and involved a complete kitchen reinstallation, meaning the restaurant had to close for business.

However, Pacific, who are expert at operating to tight deadlines, ensured this was kept to an agreed 10-day period of time, which allowed KFC to open the diner on a purely “drive-thru” basis while the rest of the works were completed.

Pacific have a growing reputation as a fast fit-out and construction company who can successfully deliver complex projects in “live” public areas with minimal disruption to neighbouring trade – to tight timescales and to budget.

Managing director Brian Gallacher, whose company employ 32 workers at their headquarters in Hillington, Glasgow, said: “The KFC in Pollokshaws looks absolutely superb. The result is striking because of the ‘designer’ feel to the restaurant and because of the extremely high quality of the fittings used. I am proud of our achievement. “KFC are expanding in the UK, and they want to support the growth of their product and brand development through an extensive image-enhancement programme.

“The works were completed on a very tight timescale over a four-week period. However, a 10-day window was allocated during which we were afforded a full restaurant closure. During this period, some works were done on double shifts, working through the night, meaning we could complete the project on time and to the required specifications.”