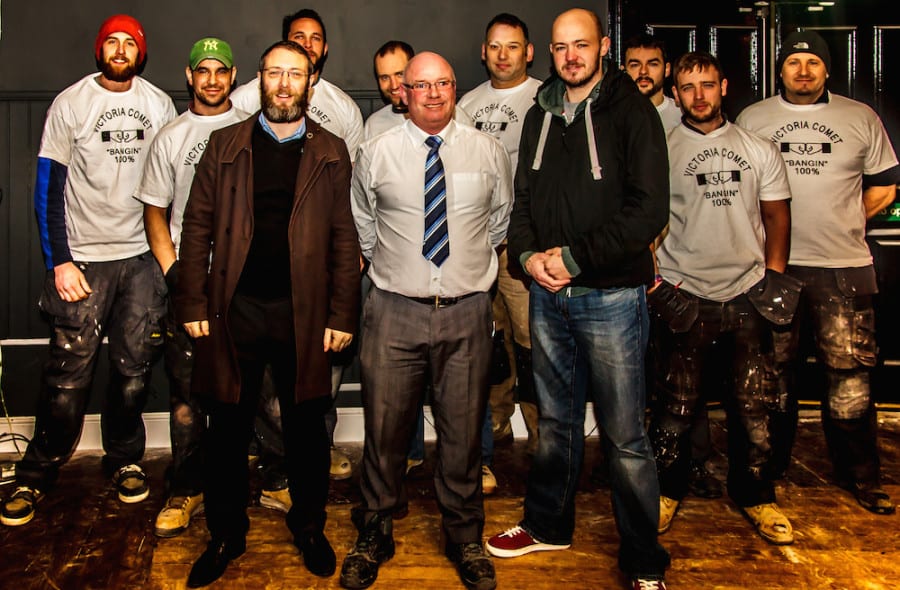 Full marks for a T-riffic performance

FULL marks to site manager George Crighton for proving beyond doubt that only the best will do for Pacific Building whenever they take on a project.

He and his team, who were in charge of the rebranding of the Victoria Comet bar in Newcastle, were given a perfect score in a health and safety audit by client company Mitchells & Butlers during a surprise routine inspection.

And to mark the accolade for George and his crew, he had T-shirts printed, carrying the legend: “Victoria Comet – Bangin’ 100%”

George, pictured centre, wearing tie, said: “I always like to get a bit of team spirit going on a job and to make sure that everyone is singing from the same hymn sheet.

“While in Newcastle, the word ‘Bangin” was used a lot to indicate that everyone was on-message.

“So when we scored 100 per cent in the Health and Safety audit, it seemed logical to acknowledge the fact we got full marks by getting a few T-shirts printed for the boys that banged on about how good we are!”

The four-week fit-out saw the historic Victoria Comet close for three weeks to allow extensive works to proceed that included the relocation of the kitchen to a different floor, the installation of a hoist, new flooring, screens, redecoration, fixed seating, a bar remodel, toilet upgrades and tiling works.

Bar manager Phil Wilson and assistant Nick Atkinson, who flank George in the photo, were delighted with the £420,000 makeover.