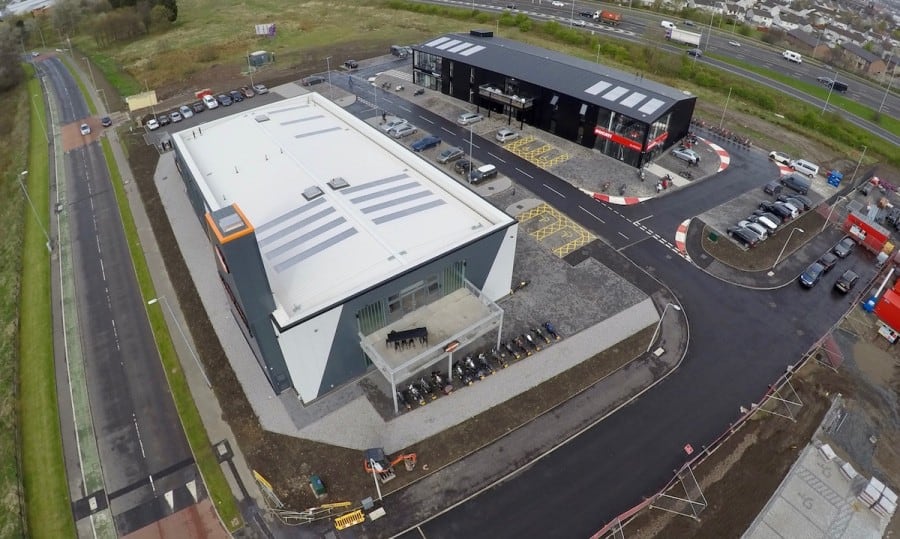 THE multi-franchise motorcycle sales and service complex built by Pacific is one of the company’s most impressive projects.

The £10 million development at Hillington Park, on the outskirts of Glasgow, by the UK arm of the business park’s owners was the first of its kind in Britain.

It features two striking buildings – one for West Coast Harley-Davidson and one for Ducati Glasgow and Triumph Glasgow – and covers an impressive 18,000 square feet.

All three motorcycle dealerships moved to Hillington after outgrowing their existing bases in Glasgow city centre and as a result of their owners being persuaded of the value of a new “destination shopping” outlet.

The purpose-built, state-of-the-art facility created in excess of 50 jobs and attracts more than 20,000 motorcycle enthusiasts every year.

And it occupies a prime position next to the M8 motorway and at the entrance to Hillington Park.

Ground works, services and concrete piling activities started in June 2017, and the project was completed and handed over to the clients at the start of 2017.

Hillington Park’s owners secured a significant contribution to the funding of the project through the Clydesdale Bank’s Commercial and Small Business section.