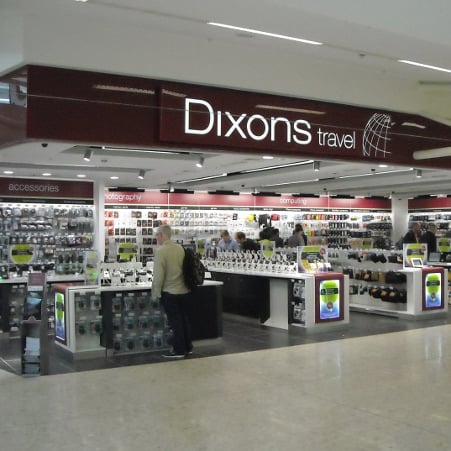 To facilitate BAA’s £40million project to extend the terminal at Edinburgh Airport and to expand the departure lounge and security area, Dixons moved from their existing airside retail premises to a unit within the new extension.

The move also required the creation of a temporary airside retail unit for Dixons to operate from until their new unit was ready to open to the public, ensuring that neither revenue nor connection with customers was lost throughout the relocation.

In addition to the dual nature of the project, Pacific Building were faced with the added security issues of working airside at Scotland’s busiest airport and working around passenger flow throughout the project.

Pacific Building deployed their fully disclosed team members, in possession of airside passes, to carry out the works and comply with the strict security measures set by BAA.

The formation of the temporary airside retail unit was progressed by stripping the shop fittings from the existing Dixons unit, which were then used to re-erect the store in its temporary new location. Works were completed over a period of two weeks, utilising a night-shift pattern that caused minimal disruption to trading and had the least effect on passenger flow.

Following the completion of the temporary unit, Pacific Building began the fit-out of Dixons’ empty shell within the newly extended area to form their new retail unit, including associated services and shop fittings to meet Dixons brand requirements, over a period of four weeks.

Pacific Building continued to work proactively, carefully co-ordinating access where required and utilising shift patterns to ensure that works were completed on time, while minimising impact on passengers.

Once the unit within the extension was complete and the store handed over to Dixons, trading began in the new premises and the temporary unit was carefully dismantled. The project was completed to the high standards expected of the Dixons brand, in addition to reflecting the quality of the newly extended departures area. Dixons were delighted with the final results.