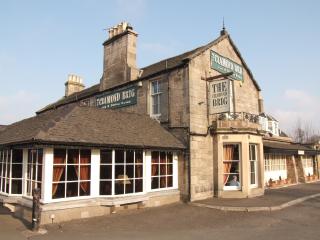 Makeover beefs up the Cramond Brig

ONE of the best loved bar/restaurants on Scotland’s east coast has undergone a significant makeover.

Pacific Building signs went up on March 10, 2014 at the Cramond Brig, on the outskirts of Edinburgh, which has recently become a Miller & Carter steakhouse.

The premises, which are situated just off the dual carriageway between Barnton and Queensferry, had a six-figure transformation over a five-week period, culminating with the handover to the clients at the start of April 11.

The Brig, as it is known locally, is the first restaurant as you enter Edinburgh from the Forth Road Bridge on the A90 heading south and is a convenient stop for business or pleasure.

The restaurant’s name derives from its location in the north-west corner of the city at the mouth of the River Almond where it enters the Firth of Forth.

Over many years, the restaurant & bar has attracted a loyal clientèle, drawn to the good food, wines & beers and the hospitality of its staff.

Miller & Carter steakhouses – part of the massive Mitchells & Butlers stable – are to be found in a variety of unique buildings and locations across the UK, from historic coaching inns and beautifully restored barns to chic shopping centres and even a boat.

This is the first project for the company carried out by Pacific Building, and it is hoped more will be in the pipeline in the months ahead.