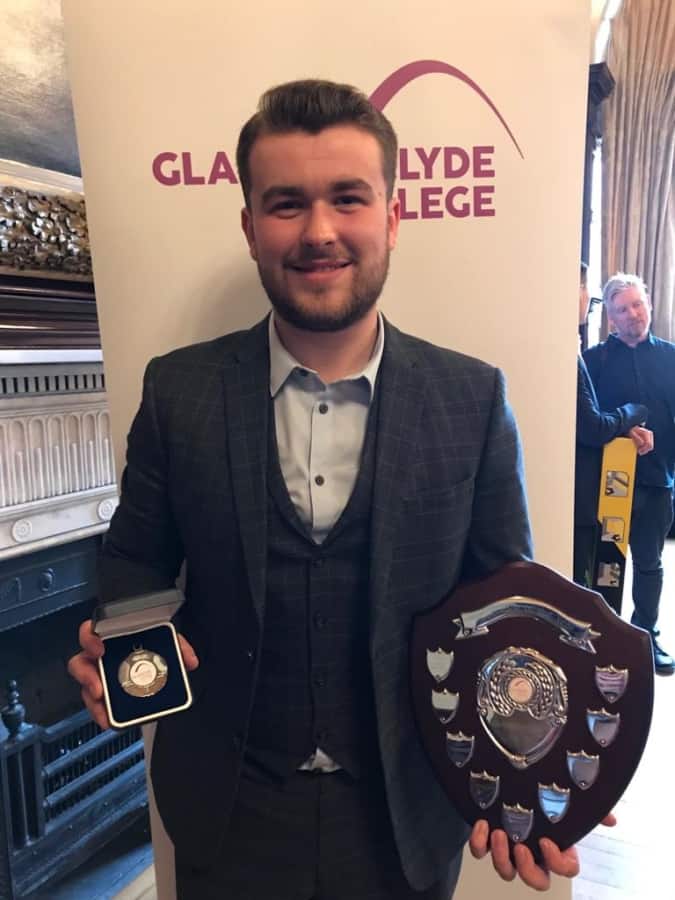 Connor does it again

APPRENTICE joiner Connor Skea has been named Carpentry and Joinery Apprentice of the Year at Glasgow Clyde College – for the second year in a row.

This almost unheard of feat stunned his colleagues at Pacific – where we continually strive to be the very best we can be.

Well, Connor hasn’t just proved that point – he’s proved that it can be done again and again; that excellence can be a habit.

Connor, who has just completed second year at the college’s Anniesland campus, was presented with a shield and a medal during a prize-giving ceremony at the Trades Hall of Glasgow.

He was accompanied on his big day by members of his family.

Connor said: “I love working with Pacific – it’s a great place to learn and the team of guys around me are all brilliant. The experience I have gained has been excellent.

“When I won the award last year, it was a real surprise. To have repeated the feat has left me shocked but proud at the same time.”

Pacific Managing Director Brian Gallacher said: “I said it last year, and I’ll say it again – Connor is a credit to Pacific and to himself.

“To have won the Apprentice of the Year award from such a large student population twice over is quite something.

“As a company, we pride ourselves in the investments we make in training and people – not to mention futures.

“The evidence is there for all to see that we are reaping the rewards of that approach. Well done, Connor.”

Connor only joined the company in August 2017, yet he has made a big impression in the short time he has been with Pacific.

Glasgow Clyde College is a multi-campus college with three sites across Glasgow at Anniesland, Cardonald and Langside.

It was formed in August 2013 following the merger of Anniesland, Cardonald and Langside Colleges and is home to more than 7,000 full-time and 20,000 part-time students.