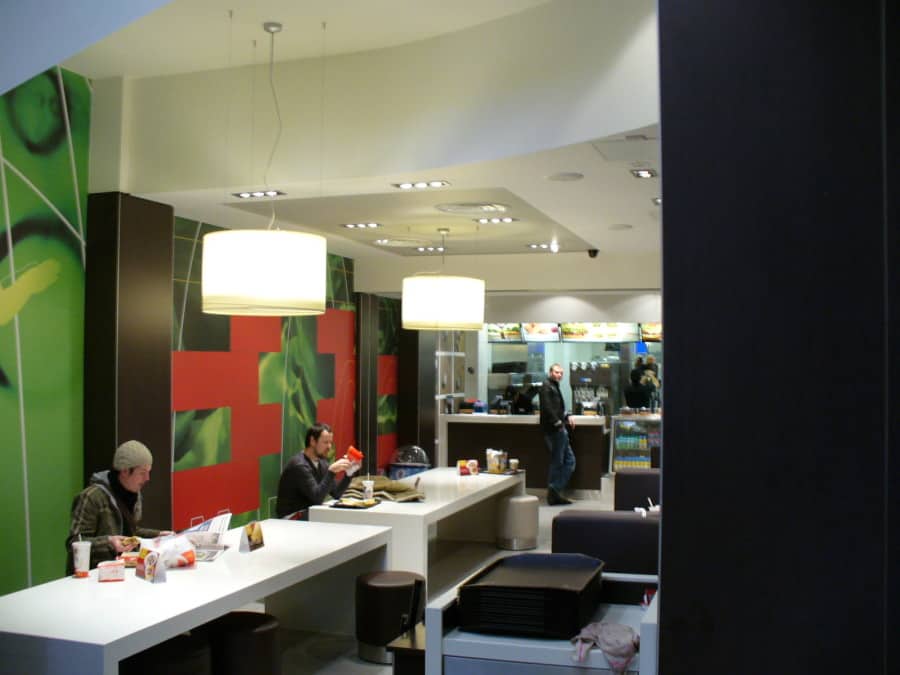 McDonald’s have started a programme to re-image 30,000 eateries around the world, intending to surprise and delight customers along the way. The result is a striking reinvention of the traditional McDonald’s brand, creating an environment to broaden their appeal to customers who may have migrated to an internet café environment: colours have muted, furniture and finishes have become more sophisticated and free WiFi is a key part of the offer. Pacific Building were commissioned to carry out an eight week refit which would see the flagship Edinburgh restaurant continue to serve food for six weeks whilst work was carried out in partially closed areas, with a final two week full closure period to finish the work. Princes Street is a particularly difficult location to access for deliveries and waste disposal, making the project much more demanding than a similar sized location.

To complete the works with the minimum disruption to normal trading, Pacific Building operated a number of nightshift patterns, closing only the upper floor of the restaurant for the first four weeks. Weeks five and six saw the kitchen carry on to operate as a take away only outlet, and weeks seven and eight were the only time when the business was fully closed. Pacific Building not only co-ordinated their own suppliers and sub-contractors, but also dealt with McDonald’s direct suppliers, including many from overseas and the main furniture manufacturer from Paris. Long lead times on these bespoke items meant procurement and forward planning were key elements in the project’s success. Handling and working within the high standards of finish specified in the design was particularly demanding due to timescales involved and the constraints of an operating restaurant, with the associated priority of strict standards of cleanliness at all times.

The restaurant reopened on time and on budget to the standards expected of a demanding client with one of the world’s most recognised brands. The new design concept, new suppliers and new central procurement team have laid down a stunning benchmark which befits a flagship project. The need to work closely to meet objectives was paramount, and Pacific Building’s ability to accommodate changes and be flexible in approach enabled them to meet the deadlines set. The end product is evolutionary for the McDonald’s brand and revelatory for their customers. Pacific Building are delighted to have risen to the challenges involved and to be associated with such a high profile and high quality project.