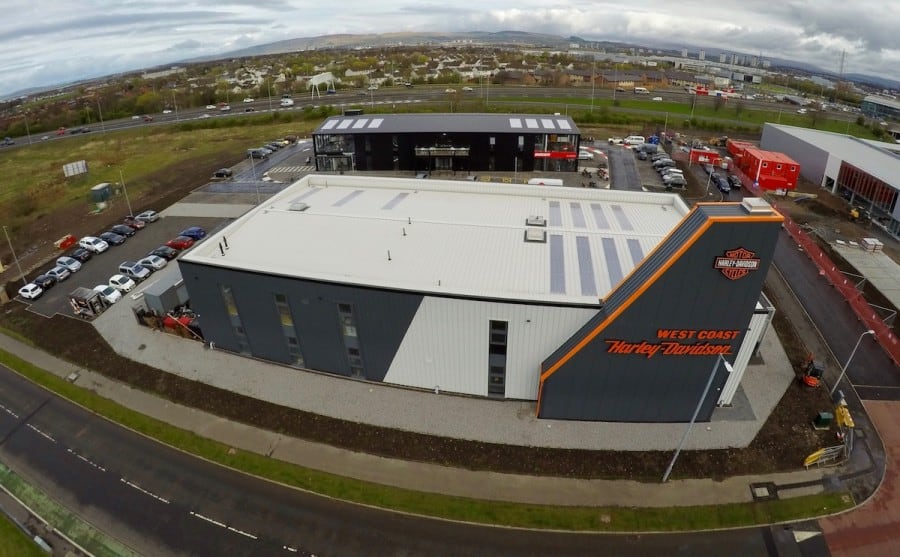 DRONE footage of the new motorcycle village created by Pacific Building at Hillington Park has been commissioned to showcase our work and to convey the scale and outstanding quality of the end result.

These spectacular aerial still photographs provide a taster of the finished video yet to come, which will feature a time-lapse sequence of the work when it was in progress.

The motorcycle village is expected to create up to 50 new jobs and attract 20,000 customers in its first year.

The new “destination shopping” concept is part of a £10 million development by the UK arm of the park’s German owners – Patrizia Immobilien – and is thought to be the first of its kind in Britain.

The two motorcycle dealerships behind Ducati Glasgow, Triumph Glasgow and West Coast Harley-Davidson have moved from their existing Glasgow city centre bases to two new, purpose-built showroom and service facilities on the site.

In May, 2016, we revealed that Pacific had secured the contract to deliver the new £10million motorcycle “village”, underscoring the company’s credentials as construction AND fit-out experts.

The announcement was followed by project updates on the Pacific website here, here and here.

The completed video will be published here soon. Watch this space …