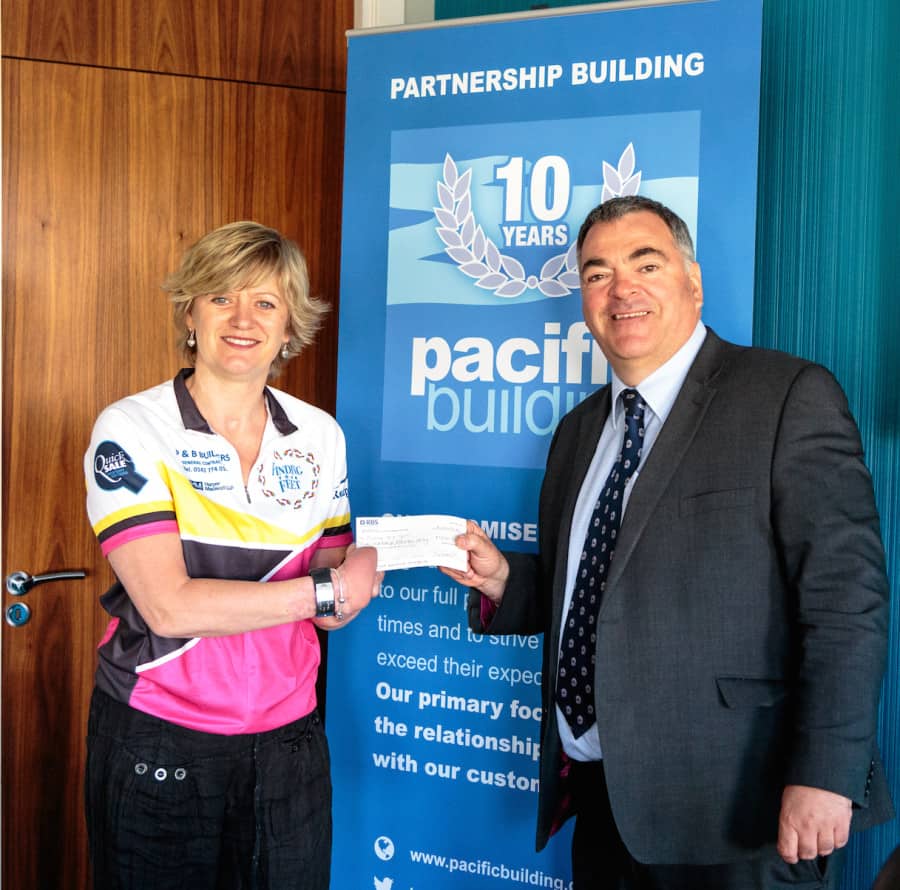 QUADRUPLE amputee Corinne Hutton was delighted to receive a cheque for £500 when she popped into the Pacific Office today (April 22, 2015).

Her charity, Finding Your Feet, became the seventh worthy organisation to benefit from Pacific Building’s generosity during their 10th anniversary year.

In the summer of 2013, Corinne, 44, a single mum-of-one, from Lochwinnoch, Renfrewshire, had her hands and feet amputated after contracting septicaemia.

But that didn’t stop her continuing to live her life – and deciding to take on a series of challenges to raise funds to help people who have experienced extreme, life-changing trauma, such as she has.

She has also fulfilled a lifelong ambition to run up the “Rocky Steps” in Philadelphia, ridden a motorcycle, had regular skiing lessons and is soon to learn to fly a single-engine plane.

Furthermore, Corinne has received the backing of actors Mel Gibson, Robert Carlyle and Gerard Butler, tennis champion Andy Murray, TV personalities Lorraine Kelly and Ford Kiernan and former footballer Vinnie Jones, who have all raised the profile of Finding Your Feet and helped it raise more than £200,000 by donating signed handprints for auction.

Corinne is due to be the first person in the United Kingdom to undergo a double hand transplant later this year.

Finding Your Feet offers a support network to those who find themselves facing life-changing trauma, by means of financial assistance, advice and emotional support.

Pacific Managing Director Brian Gallacher said: “What an inspiring person Corinne is – and so deserving of our cheque.

“We know she’ll put the money to good use to help people who are facing overwhelming odds overcome adversity and lead full and exciting lives.”