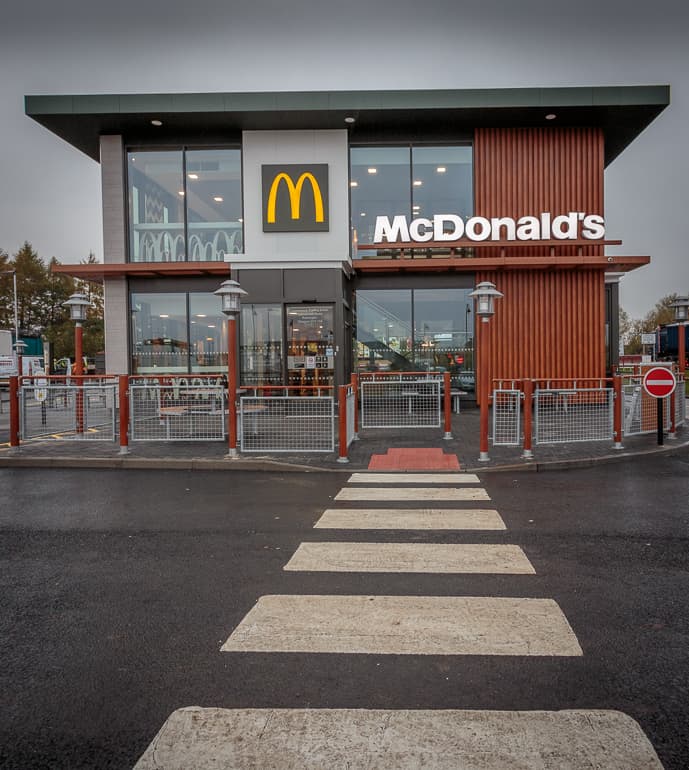 Baton handed over to McDonald’s on Games site

THE all-new McDonald’s restaurant in built on a legacy site from the 2014 Commonwealth Games in Glasgow has been handed over to the client company.

It is the first two-storey, drive-thru diner in Scotland – and it has made a striking impact at the location in Dalmarnock Road, not far from Rutherglen.

A few weeks ago, when preparation work commenced, the first of 51 concrete piles were driven into the ground on the site, which is located not far from the former athletes’ village.

The restaurant was constructed on a vacant plot next to the Tesco Extra superstore, which is one of very few retail outlets serving the area at the moment.

It is hoped the new McDonald’s will be a valuable and significant addition to the leisure experience in an area of Glasgow that has witnessed dramatic transformation – and herald the arrival of other, similar outlets.

It is part of McDonald’s “Experience of the Future” framework and adheres to the “Wood and Stone” decor theme.

The restaurant also boasts a double – or “side-by-side” – drive-thru, which allows customers’ orders to be delivered quicker and more efficiently.

Furthermore, the drive-thru is of the “Fast Forward” type, which cuts queuing times for customers by providing a third service window.

Under the previous set-up, customers placed their orders at a kiosk on entering the drive-thru, then drove up to one of two windows to pick up their food.

However, if orders weren’t ready, the system occasionally became backed-up, resulting in delays.

One of the first “Fast Forward” drive-thrus in Scotland was introduced at the McDonald’s in Bellshill, Lanarkshire.