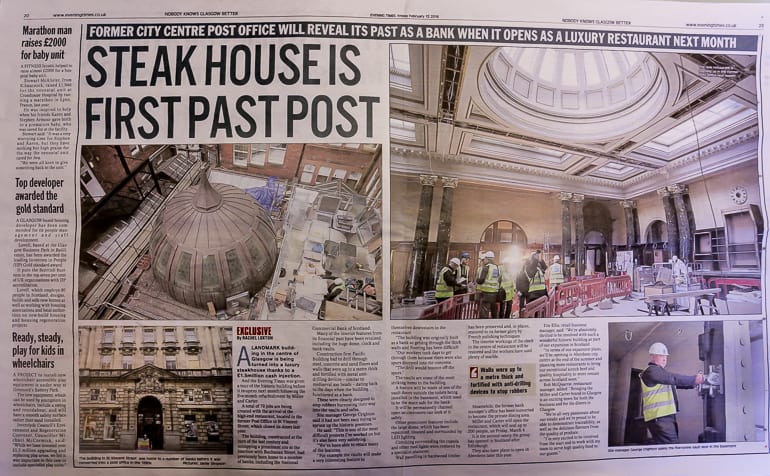 FABULOUS media coverage has been devoted to Pacific’s brilliant work to transform a much-loved listed building into an upmarket steak restaurant.

The £1.5million project to convert the former bank and Post Office into Scotland’s second Miller & Carter steakhouse was given a centre spread in today’s Evening Times (12/2/16).

The refurbishment has been ongoing for five months, following the closure of its imposing doors in Glasgow city centre last year.

The building, constructed at the turn of the last century and occupying a prominent site at the junction of St Vincent Street and Buchanan Street, had previously been home to a number of banks, including the National Commercial Bank of Scotland.

Many of the interior features from its financial past have been retained, including the huge dome, clock, bank safe and massive vault doors.

Pacific Building had to drill through steel, concrete and sand floors and walls that were up to a metre thick and fortified with metal anti-drilling devices – similar to mediaeval axe heads dating back to the days when the building functioned as a bank.

Read more about the new Miller & Carter in the Times here.